Drenching rain, lightning and thunder almost caused us to give up without getting the bottom of our canoe wet on this first day.  The explorer in each of us could not allow that to happen – our ancestors having sailed the Great Lakes with wooden hulls and canvas sails – so we drove to the Liberty General Store, south of Jackson along the US-127 corridor and as close as we could drive to the source of the Grand River.  The manager of the store had given us permission to leave our vehicles at the store even though the business was closed this Sunday.

There is a dam at the store, the site of an old mill on the river, and a resultant millpond. From the dam we set out upstream towards Grand Lake, one of two sources of the river.  We would not reach Grand Lake this day due to low water and Giant Bridge Spiders but we got as close to the source as anyone in a canoe could get, which to my way of thinking is damn close.  Perhaps we’ll go all the way to the source on a day when the sun is shining, the water higher, and the spiders less voracious.

The first portion of the millpond was relatively free of lily pads, offering an easy paddle to 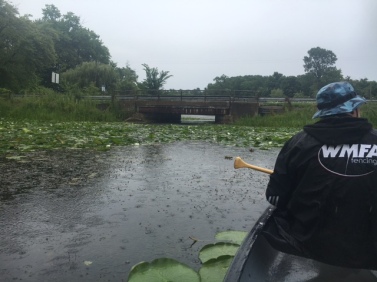 a low bridge, so low that we at first wondered whether we would be able to make ourselves small enough to glide underneath.  We bent low at the waist and used our hands to pull ourselves under the bridge.  It was at this point that I noticed huge spiders dangling from webs with strands as thick as the rope we used to tie our canoe to my truck.  These Giant Grand River Bridge Spiders – for such would my research later reveal them to be, Pons Araneae Gigundus Flumen – apparently didn’t notice us until we were halfway under the bridge, at which time they began – in unison – scurrying towards us in from all directions.

“Duck your head!” I screamed to my brother, then grabbed the bridge’s clammy undergirding and pulled as hard as I could, sending our canoe roaring out of the darkness and into the next pond.  If you’ve never heard spiders scream in anger and frustration . . . well . . . it’s is a sound you’ll not forget.  Trust me.

We now entered the first of two connected but distinct ponds, both choked with lily pads.  It was a bit spooky as we paddled forward, the lily pads seeming to grasp at our canoe and the frequent but unidentified sound of numerous large ‘somethings’ belly flopping into the water ahead, bellyflopping always just before we could focus our attention and our eyes to determine precisely what sort of beast was bellyflopping.  Soon there was roiling water at the water line of our canoe.  Muck from the shallow bottom mixed with tepid water, causing the invasive Eurasian Trefoil to fan out and quiver enticingly.  Had I been in the Everglades I would have suspected angry alligators or playful manatees, but we were at the headwaters of the Michigan’s Grand River.

River nymphs?  Dragons?  Only an impression of flame – sensed rather than seen out of the corner of one eye – confirmed the latter.  These local dragons are reputed to be more playful than dangerous, and I was able to relax at last and enjoy their company.  Neither my brother nor I had played with dragons in many years. 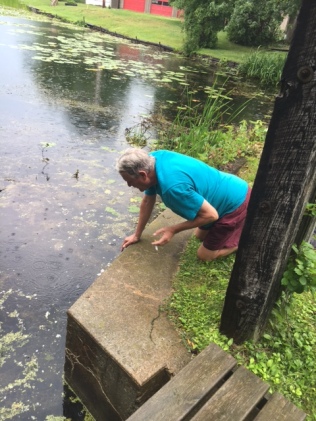 his cell phone in the millpond but retrieved it – in perfect working order, it being sealed plastic bag – after 30 minutes.  We left our paddles and a life jacket on the ground while we drove off to scout future legs of our journey but returned to find all items just as we had left them.  Tom cut his toe in retrieving the phone.  In the future all valuables will be securely zipped into pockets.  In the future we will remember to check for items which, if lost, would leave us stranded.  We will bring a first aid kit, and Tom will not wear open-toed sandals.

No harm done.  Lessons learned.  Onward down the Grand.

This entry was posted in Uncategorized. Bookmark the permalink.