Walk a Mile in Our Shoes

Back to the Source – Foot Paddling

Downstream from the Liberty Millpond Dam 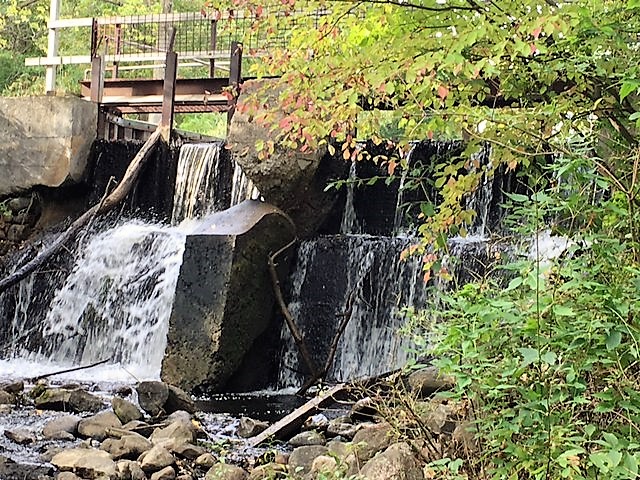 On July 24, 2016 (last year), we started this adventure at the Liberty Millpond Dam, near Grand Lake, the river’s primary source. On that first day, we paddled upstream, on the Millpond and its associated waters, a sort-of lake with no name. If you scroll all the way down to our first blog posts, last year, you can read about it. (And, you can see a photo and a video of the dam in winter, if you look at our January 7, 2017 posts. You also can read what Joe wrote on April 16, 2017, about paddling Grand Lake with one of his grandsons.)

Right after that dam, the river really is more of a creek. It is not deep enough to float a boat. So, last year, we skipped ahead to deeper water. For our second leg last year, we took our canoe to the Loomis Road Bridge, far enough downstream, deep enough that we could paddle most of the time. August 7, 2016.

BUT! We always knew we had to go back to that early skipped part of the river. We did it

Riverbed rocks made for difficult walking, these just below the millpond dam.

today. We had to walk right in the river, mostly, on top of sharp rocks, through clear water and black muck. . No roads or trails along the route. Only a few places where we could walk along the bank, in people’s yards. I worried that the people might not like to see us in their yards, but no problem. We saw one guy cutting his grass. We waved at him, but he ignored us. A woman at another house greeted us cordially, welcomed us, and laughed at us.

Our river is only about eight feet wide in this stretch. We encountered fallen trees that blocked us. In one place, we got over a fallen tree, but then got stuck in vines that grew all over the tree. Honestly, we were trapped. I was able to claw and thrash the vines enough to get out, and Joe was able to crawl after me. This may seem silly, but it was a big deal. It took about 15 minutes. I came out with a bleeding leg and a bleeding forearm.

These are the vines from which Tom emerged bloodied and bruised. Traveling the Grand in Jackson County is hard work.

Today was a beautiful sunny early Fall Michigan day. I spent most of my day looking down, at the rocks in the river. I had to remind myself to look up sometimes, to try to see birds and butterflies. But, I mostly just looked down. I saw a few minnows and fish plus clam shells, but I believe Joe, who was ahead of me, scared most of the wildlife away, before I had a chance to see them. I did hear some Blue Jays.

Today, we closed a big gap in our source-to-mouth Grand River adventure. In October, we intend to make it half way. We will close our other gaps. And then we will have done the entire river from source to Grand Ledge. Then, maybe, next year, we might make it to the river mouth, our home town, our home pier, our home beach, Lake Michigan, Grand Haven, Michigan.

A jaunty Tom just minutes into the day’s journey, before doing battle with rocks and vines.

(Editor’s Note: It is often said there are two sources of the Grand River. Under this scenario there is the Main Branch, flowing out of Grand Lake in Liberty Township/Jackson County; there is also the North Branch, flowing out of Center Lake in Leoni Township/Jackson County at Michigan Center. These branches of the river merge at US-127, east of Jackson, and from there the Grand flows as one river to Lake Michigan. Most efforts to paddle the entire river, it seems, start at Michigan Center because it is easier to float a canoe or kayak there. We consider the waters flowing out of Grand Lake to be the true source of the river and have concentrated our explorations in that area.)

JOIN US ON THE RIVER: BYOC (Bring Your Own Canoe)