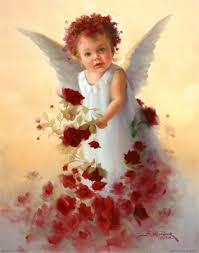 An excerpt from my mother, Catherine Verschoor Neely McNabb’s, writings.  She is alive and well and living in Seattle.

I do not know how old I was that year I saw and heard the Christmas angels – – seven, eight, or even nine.  It was early on Christmas morning, before anyone was stirring.  I became conscious of the presence of angels moving up and down a staircase above the foot of my bed.  There was singing, a bubbly crystal-clear sound, and a swaying rhythm.  It gave me a sense of profound well-being and comfort, and a feeling that all was perfect in my world just then.

Later when we were having breakfast around the tree and opening our presents I sort of explored the subject to see if anyone else in the house saw or heard the angels.  Nobody picked up on my hints or gave me a lead-in on the subject of angels so I kept it always to myself.  I really did not want to expose my wonder-vision to anybody by actually talking about it, especially if no on else had the experience.  To this day I can recall the feeling I had.  Every Christmas morning still I hug it to my heart and savor it privately.  I do not think it was the dream of an over-excited child.  I think there really were angels in my bedroom that Christmas morning.

One other time in my life I have had this feeling of the nearness of a heavenly presence.  That time I felt it was God who was near me when our second son, Joey, was baptized at Central Reformed Church inGrand Rapids.  Ralph and I were standing in the pew, Joey in my arms wrapped in an embroidered yellowed wool blanket that had been around my own father when he was baptized in the same church.  Tommy, age three-and-a-half, was standing on the pew before us.  All at once I felt a lift to my heart, a suffusion of joy, and I knew God was there with us.

That was more than 50 years ago.  The feeling or vision has never reoccurred.  But it is vivid and still real.  Perhaps an opening into another world.

This entry was posted in Uncategorized and tagged angels, childhood, Christmas, heaven. Bookmark the permalink.