Our Mother Crosses Her Final River

Editor’s Note: in the last entry I wrote that one of the reasons we have not been on the river yet this year is because our mother was ill. She died on June 13.

On June 13, 2018 in Holland, Michigan, Catherine (Cassie) Nell Verschoor Neely McNabb followed her beloved parents, many dear life-long true friends, and her loving husbands Ralph Neely and Bill McNabb, straight up into Heaven. She was the final survivor from the Birthday Club, a group of loving friends who shared their lives, loves, adventures, and sorrows for over sixty-five years. She was ninety-two years old.

Cassie was born in the Roaring Twenties. She lived through the Great Depression, World War Two, and everything since. She graduated from Grand Rapids Central High School and the University of Michigan.

Cassie said, “You never know what may be around the next corner.” In fact, she published a book with that title. She lived, raised her family and worked in Grand Rapids, Cleveland, Ann Arbor, Seattle, Sun Valley, and Holland. She was a prolific writer, a world-class typist, a B&B entrepreneur, an amazingly talented artisan, limerick expert, animal lover, collector, butterfly enthusiast, and much more. She welcomed all into her home, and always found room for more at her table.

Cassie’s family plans a celebration service on Saturday, July 7 at 11:.00 am, at  the Klaasen Family Funeral Home, 1500 Robbins Road, Grand Haven. A luncheon will follow at Cassie’s former home on the beach. Cassie would have treasured contributions to the Humane Society, to any church that feeds the poor and does not discriminate against women or to any public library.

Years ago, Cassie wrote: “I wore a red dress to my father’s funeral because that was his favorite color. Recently, in the paper, I read an obituary that requested friends of the deceased wear bright colors to the funeral. Please do that for me.” Please wear bright happy colors if you come to Cassie’s celebration.

We all love a lady named Cassie.

To the end, she was loving and classy.

She put up with the toil.

She was smart; she was loyal…

How we’ll all miss this beautiful lassie! 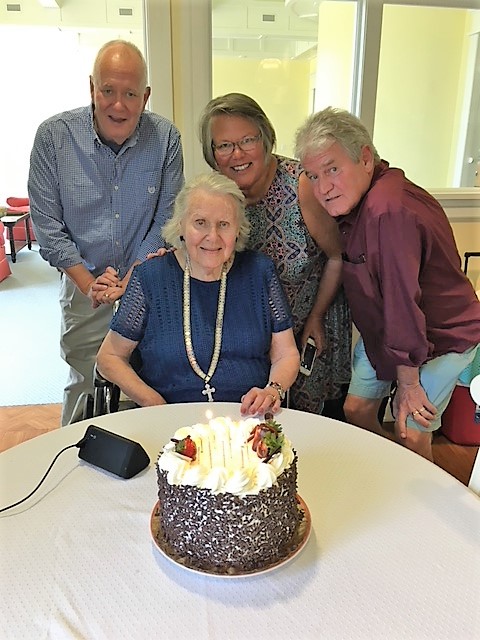 This entry was posted in Uncategorized. Bookmark the permalink.

1 Response to Our Mother Crosses Her Final River