Writing of other things until we can get out on the Grand again.

We arrive at the Ann Arbor train station 40 minutes before our scheduled 7:40 am departure for Chicago. The lobby is nearly empty when we get there. More experienced Amtrak travelers begin to arrive about 20 minutes prior to departure. Another early arriver has doused herself in perfume in preparation for her journey. The Eau du Kerosene devotee is easy to spot, an older woman who no doubt burned out her own olfactory sense decades ago. My eyes water and begin to itch. I pray she will not be in our car once we board and am eventually relieved to see her move towards the front of the train and a seat in a coach car.

I splurged; we’re traveling business class on the way to Chicago, celebrating my wife’s retirement from the University of Michigan. Two nights in the storied Palmer House Hotel and eating in good restaurants is on tap, along with shopping for obligatory gifts for grandchildren and visiting a museum or two. We take the train to be festive and also because I hate driving in unfamiliar big cities. The total cost for the two of us on Amtrak was $221: business class on the way to Chicago, coach on the way home with a senior discount applied to both legs of our journey. Driving would require at least two $35 tanks of gas, wear and tear on my car, expensive parking in the city and the incalculable cost to my mental health of navigating a strange city while lost and terrified. Amtrak is a bargain.

The leather seats in business class are roomy and copies of the New York Times are available throughout the car. It tickles me that “the failing New York Times” is provided at government expense during the reign of Donald Trump, and I am glad that Fox News does not offer a print alternative to the Old Gray Lady of real journalism.

The train departs Ann Arbor on time and we enjoy familiar sights along the Huron River. Just shy of Dexter we can’t quite see our own home but glimpse the entrance to our neighborhood. Before long we are remarking on the Jiffy Mix silos in Chelsea. In the farm country between Grass Lake and Jackson there is just enough snow to fill the furrows in the fields, while the top of the corresponding ridges lay uncovered and bare. Deer raise their heads to watch the train roll by, alone or in small herds. The occasional solitary house near the tracks sets me to wondering if I would enjoy living so closely to a busy railroad line. I decide I would, that the sound of a train’s whistle would help me remember that another world exists beyond the confines of my daily horizons.

The approach to Jackson on Amtrak is dreary and depressing. Shabby. Heaps of slag along the track. Abandoned, boarded-up industrial buildings speak of a time when jobs were plentiful and environmental regulations nonexistent. My outlook brightens when we pass through Jackson’s downtown and I spot the authentic farmers market where I once bought the largest, firmest cabbages I have ever encountered. Next door to the market is the Grand River Brewery. Two years ago the brewery welcomed my brother and I after a trip on the Grand River even though we had capsized that day and arrived muddy and feral. Beyond Jackson we pass through Parma, where an old station from the long-defunct Jackson to Parma Interurban now serves as that community’s library. I speculate on how different life must have been in the days when trains stopped regularly in communities like this, promoting commerce and contact with the outside world. Now the trains don’t slow even down. 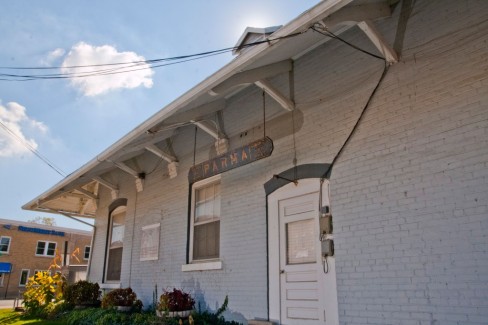 The Parma Library, formerly a stop on the Jackson-Parma Interurban Line.

As the train slows for a stop in Albion we pass the college I attended and the fraternity house where I lived for a year. There are good memories and bad associated with this place. I haven’t had a cigarette in nine years or a drink of anything alcoholic in eight, but my mouth suddenly tastes like an ashtray and I feel hungover. The flashback ends abruptly when we arrive at the Albion station. I crane my neck for a glimpse of Superior St., downtown Albion’s gritty and resilient main drag. I’m pretty sure I was the first Albion College student to discover Lopez Taco House in 1973 or ’74. It is a beloved local institution and I can’t imagine how many jobs it has provided over the years in a place where jobs are not easy to come by.

End of Part One

5 Responses to An Amtrak Travelogue: Ann Arbor to Chicago