Sept 5: How Way Leads On To Way

I will remember the summer of 2016 as the summer of the canoe.  It’s sort of funny how this whole thing started, this idea to canoe the length of the Grand.  It’s funny, too, how way leads on to way (Robert Frost from ‘The Road Not Taken,’ if that sounds vaguely familiar) and we end up doing things we never expected as a result of the decisions we make.  Here’s the short version.

My wife and her daughter were considering a trip to Italy next year and looking into the particulars.  The off-season rates were good and it seemed like the whole thing might work out for them.  I got feeling sort of left out – acting like a big baby, probably – and raised the idea that maybe Italy should be a trip for the two of us, as a couple.  She wasn’t opposed to that idea, but pointed out that a trip to Italy almost requires time spent in the vineyards and I no longer drink alcohol.

Damn-it-all, I knew she was right because I occasionally catch myself debating whether I might be able to enjoy a few glasses of wine again someday if I were to travel to Italy or France.  Could I drink a normal amount of wine under those circumstances without then going on a quest to sample every vodka available for sale on the continent of Europe?  This issue is probably not worth investigating – pretty sure I already know the answer – but I digress.  I stopped sulking fairly quickly and told my wife, “Fine, you can go to Italy but I’m going to canoe the entire length of the Grand River!”  So there!  She thought that was a swell idea and here we are, way leading on to way.

The fact that I gave up drinking four years ago, and sulked about it when wife was considering a trip to Italy, led to my buying a used canoe on Craigslist.  That led to selling my car and buying a used pick-up truck for transporting the canoe, which has led thus far to four outings exploring the Grand in Jackson County, the realization that there’s a lot more going on in the city of Jackson than I ever would have guessed, and a day spent canoeing and swimming in Crooked Lake near Columbia City, Indiana.

(That last one – Crooked Lake – stems from the fact that my wife spent youthful summers at a family home on that lake and it has always held a special place in her heart.  Having a canoe and a pick-up truck allowed us to visit for a day recently, and I’ve become a huge fan, too.  Clean water, superb swimming, no-wake so no noisy Jet Skis . . . simply put, it’s a great place.  We paddled around the entire lake and explored connected Little Crooked Lake as well – Linda says it used to be called Penny Lake.  Maybe we’ll buy a place there one day, when our ship comes in.)

Why the Grand?  Why not the storied Au Sable, perhaps?  Because the Au Sable – nor any other river except the Grand – is not storied to us, to brothers Tom and Joe Neely.  We spent our summers on the shore of Lake Michigan in Grand Haven, walking a mile south to the pier most days to watch the Grand empty into the Big Lake.  We watched huge lake freighters head up the river to load sand, then head back downriver and out into the lake, all the while dreaming that one day we would travel the lakes like this.  We heard the fog horn (AH-EEWWWW-GA!) guiding boats into the river’s mouth until one year that horn gave way to an electronic ping; safer for shipping, no doubt, but nearly as romantic to young boys dreaming of adventure on the Great Lakes.  We hiked through the dunes to Dewey Hill, below which someone had affixed a rope to a tree on the Grand’s shore.  Out, out, out we swang, then let go at just the right point and dropped into a hole so deep we could never touch the river’s bottom just 20 feet from shore.

So, you see, it was the Grand or nothing for us. What or where is your Grand River?  Might you get back to it still?  Or is the Grand River of your past leading you somewhere entirely new in the future? 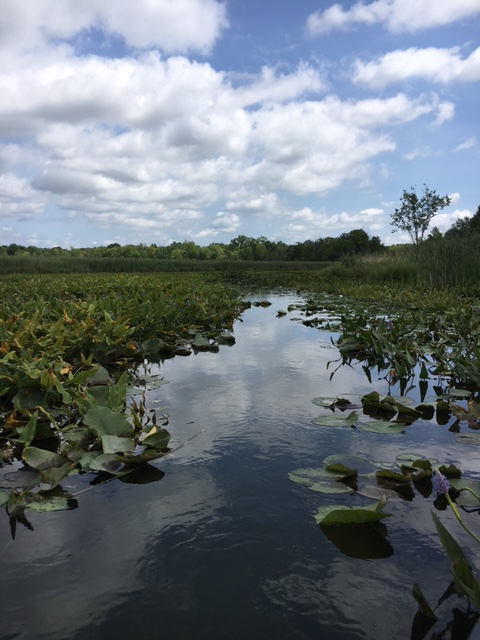 Two roads diverged in a yellow wood,
And sorry I could not travel both
And be one traveler, long I stood
And looked down one as far as I could
To where it bent in the undergrowth;

Then took the other, as just as fair,
And having perhaps the better claim
Because it was grassy and wanted wear,
Though as for that the passing there
Had worn them really about the same,

And both that morning equally lay
In leaves no step had trodden black.
Oh, I kept the first for another day!
Yet knowing how way leads on to way
I doubted if I should ever come back.

I shall be telling this with a sigh
Somewhere ages and ages hence:
Two roads diverged in a wood, and I,
I took the one less traveled by,
And that has made all the difference.

My brother and Captain Joseph has waxed literary! He challenges me to a poetry contest in our conquest of the Mighty Grand. El Rio Grande. Flumen Grandissimus Michiganensis.

Publius Vergilius Maro wrote about the mighty helmsman Palinurus, in noble hexameters, in Book V of the Aeneid. Joe actually reminds me a lot of Palinurus.

Father Neptune yoked his wild horses with gold, set the bits
in their foaming mouths, and, with both hands, gave them free rein.
He sped lightly over the ocean in his sea-green chariot,
the waves subsided and the expanse of swollen waters
grew calm under the thunderous axle:
the storm-clouds vanished from the open sky.
Then came his multi-formed followers, great whales

But, then, Palinurus fell asleep and fell overboard.
Behold, despite his caution, the god shook a branch,
wet with Lethe’s dew, soporific with Styx’s power,
over his brow, and set free his swimming eyes.
The first sudden drowse had barely relaxed his limbs,
when Sleep leant above him and threw him headlong
into the clear waters, tearing away the tiller
and part of the stern, he calling to his friends often, in vain:
while the god raised his wings in flight into the empty air.
The fleet sailed on its way over the sea, as safely as before,
gliding on, unaware, as father Neptune had promised.

I actually prefer the Latin. Don’t you?

We would love to hear from any who may stumble across this blog: Tom Neely can be reached at timbuktom1@gmail.com; Joe Neely can be reached at joeneely55@gmail.com. If you have a kayak or canoe we would love to have your join us for a day. We have been basing our trips on the routes laid out by the Grand River Environmental Action Team, which can be see here: http://great-mi.org/trail_maps2.htm. Our plan is to complete all these Jackson-area trips before the onset of cold weather.